Anjay Goel
Suggest Me A Tagline
Home How to count votes?
Post
Cancel

How to count votes? 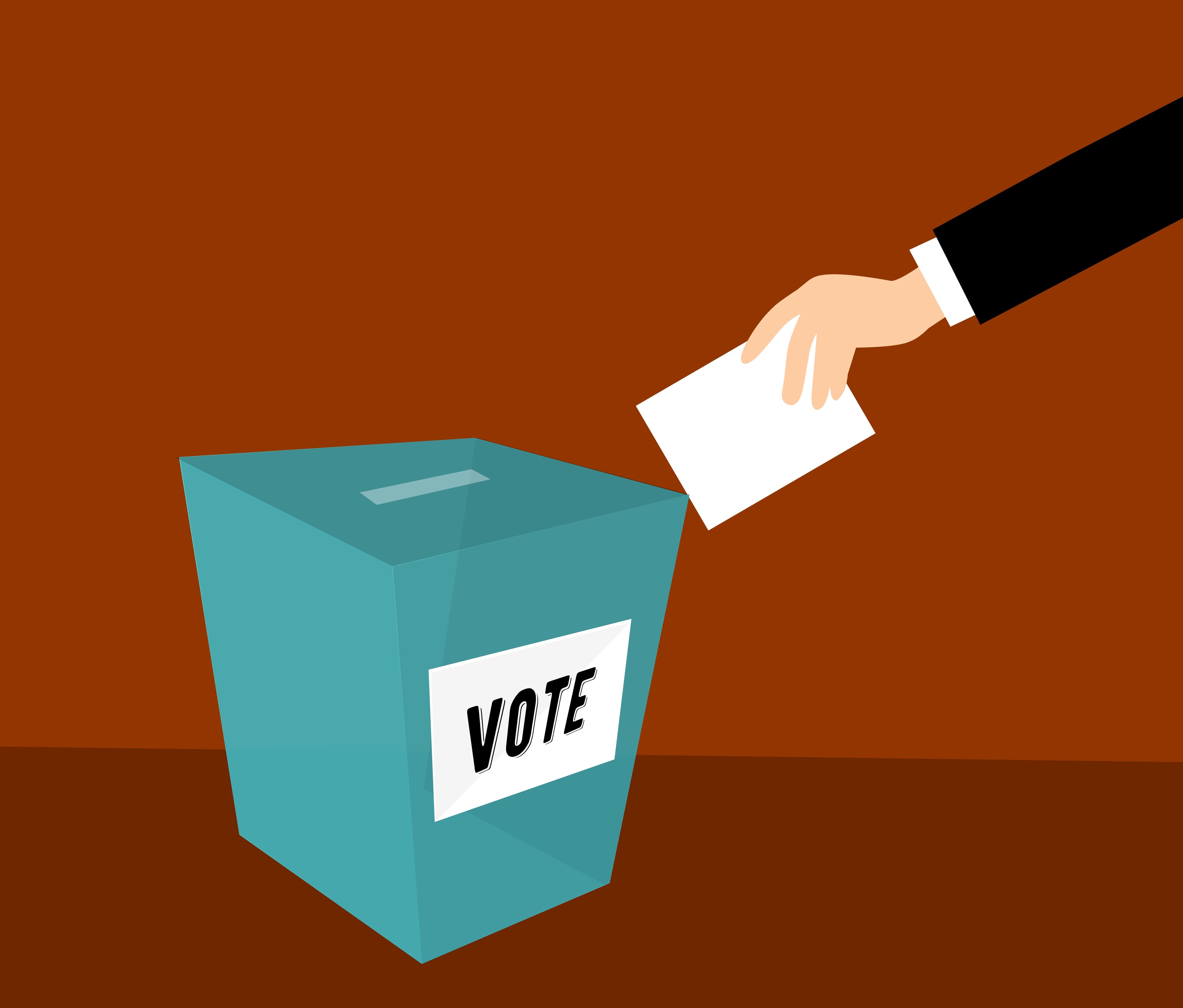 Voting is ubiquitous, be it something as important as choosing a country’s head of government, head of a student body, or answering something as trivial as “What movie should we go to?”. It arises naturally from the need to aggregate the varying individual preferences into some outcome. Yet rarely will you think about the voting system that chooses the outcome, even when the choice of the voting system can drastically change the outcome of the vote. What are the voting systems that I am talking about? To explain, let us start with perhaps the most simple and popular ones:

There are tons of others, a few of which I shall come to later in this post. Hereafter, to make things more intuitive, I assume we are voting to choose a representative.

A very obvious flaw with the majority rule is that no candidate may get the majority in the case of more than two candidates. This may render it useless in many cases. After all, we don’t want to restrict ourselves to two choices, Do we? So we resort to a plurality vote.

That is, the candidate with the most votes is the winner. Very simple and logical. But is it? To illustrate the problem with plurality voting, Let’s pick up an example. Say Nehru, Patel, Azad, and Shastri contest an election for the head of the student body. There vote tally is given below:

Under plurality voting, Shastri wins the election. Upon inspection, you will realize an obvious flaw that a candidate can win with very few votes. If the number of candidates increases to $N$, a candidate can win with as little as a single vote more than $\frac{1}{N}$ of the total votes. Hence, In such cases, plurality voting is not very good at representing the choice of all the voters. Let’s move on to other problems with this voting system.

​ Now, Let’s say Nehru and Shastri are the usual two candidates, polar opposites on the political spectrum. Fierce competition between the two makes the outcome very uncertain each year and the margin of winning very small. Patel, an ally of Nehru, is unsatisfied with Nehru. So he decides to nominate himself for the election. In the election, many people more closely aligned with Patel than Nehru voted for Patel instead. The final outcome is given below:

Under plurality voting, Shastri wins the election easily. Let’s see what has happened here. By being closer to Nehru on the political spectrum, Patel took a larger chuck out of voters who prefer Nehru to Shastri. Patel’s nomination leaves the majority (the 47% and the 5% who would have chosen Nehru over Shastri in the absence of Patel) dissatisfied with the result. This is called the Spoiler effect or Vote Splitting.

​ Despite his best intentions, Patel realizes the problem and drops out of the race the following year. After observing the whole fiasco, no third candidate stood up (or was forced to sit down) for elections ever since. The election thus reverts back to its status quo of Nehru vs. Shastri. As we can observe, this voting system tends to reduce the number of candidates two. This is called Duverger’s law. This is not always true, but more often is the case.

The problems above can be summarized by the following statement that I quote from Wikipedia:

Is this particularly unfavorable outcome a fault of the candidates? or is it of the voters? Perhaps a large share of the blame goes to the voting system used to decide the winner, aka plurality voting. Something either so sneaky that no one noticed or so simple that no one chose to question.

Now, let me present another voting systems that can be used to decide the winner.

This method extends the majority rule that allows for more than two candidates. It chooses a candidate who wins every head-to-head majority election against the other candidates. The winner is known as the Condorcet winner. Note that we don’t actually need to conduct multiple elections. We just need to collect each voter’s complete preference order, i.e., their ranking of each candidate.

In Patel vs Azad, Patel wins 2 vs 1; in Azad vs Nehru, Azad wins 2 vs 1 yet in Nehru vs Patel, Nehru wins 2 vs 1. It’s This leads to a paradox! From transitive individual preferences, we have arrived at cyclical societal preferences!

Also a ranked voting system. When counting a vote, the highest-ranked candidate gets $n-1$ points & the lowest-ranked candidate gets $0$ points. A candidate’s score is simply the sum of their points across all votes. And the candidate with the highest score wins. Observe that this voting system considers all of a voter’s preferences, not just the most preferred candidate. But it violates the Condorcet winner criterion and other two essential properties that we wish any voting system should have, namely, Majority Criterion and Independence of irrelevant alternatives.

Lets see the above two criteria with an example:

Out of, say, 100 votes, the final score of the candidates will be Patel (194), Azad (198), Nehru (100), and Shastri (108). Hence, Azad wins the election despite Patel having a majority! This violates the majority criterion. Also, notice that if Nehru is eliminated, Patel wins the election. Thus, this voting system violates the IIA property too.

A ranked voting system like the above two. The method works a little differently:

It repeats the following steps until only one candidate remains:

Let’s see what happens in our previous example of “Nehru vs Shastri” from plurality voting. Suppose, given the scenario as discussed previously in plurality voting, we get the following preference profile:

Patel gets only 5% (4% + 1%) of the votes, thus placing him last in the third position. The votes of those who voted for Patel are distributed among their second preferences. Therefore in the next round, the tally is as follows: Nehru: 51% (the original 47% and 4% who put Nehru as their second choice) and Shastri: 49% (48% + 1% from second choice).

Now Shastri is eliminated (gets 2nd position), and Nehru wins the election. And the majority is happy with this outcome. While this voting system does not entirely eliminate the problem of tactical voting and spoiler effect that we discussed above, it does reduce them to a great extent. In fact, it can be shown that no ranked voting system is resistant to tactical voting! A result know as Gibbard-Satterthwaite Theorem. Also this voting system satisfies the majority criterion but violates IIA and Condorcet winner criterion. It also violates another important property we wish any voting system should have, aka Monotonicity.

Let’s illustrate monotonicity with an example:

Under instant-runoff-vote, Patel wins the election. But let’s see what happens when 10% out of the 35% who put Azad first move their support to Patel, i.e., the currently winning candidate.

We observe that Nehru wins the election. An increase in the votes of Patel led him to lose the election! This might seem like a paradox. But if you ponder over it closely, you realize that it’s not Patel getting more votes that caused him to lose the election, But it’s, in fact, the change in the distribution of other candidates’ votes. The 10% votes could have gone to a fourth candidate or been thrown away into oblivion, yet the outcome would remain the same.

The four criteria that I have shown above are called fairness criteria. These are some of the properties that we expect a good voting system will fulfill. Yet non of the four voting methods that we saw earlier satisfies all of them simultaneously. Unfortunately, as it turns out, no ordinal voting system can satisfy all of them simultaneously. This famous result is know as Arrow’s Impossibility Theorem

We have yet to address other problems that are not about the voting systems themselves. They are about how the preferences (aka the votes) were collected. Remember, we asked the voters to list the candidates in order of their preference. In doing so, we inherently have made some assumptions such as Transitivity of preferences. That is, for any two choices $a$ & $b$, we have $a\succeq b$ (read it as “a is at-least as good as b, if not better”) and $b\succeq c$ $\implies$ $a\succeq c$ . Is this always the case? If I prefer $a$ over $b$ & $b$ over $c$, does it always mean I prefer $a$ over $c$. Can the opposite not be the case? Another assumption is Completeness of preferences. That is, Given two choices, $a$ and $b$, we have either $a\succeq b$ or $b\succeq a$. In other words, you always have a preference.

Indeed, you would have encountered some situations in your life where this is not the case. For the folks from IIT KGP, remember choosing the preference order for the breadth allocation and how frustrating the task is? Whether or not these two assumptions are correct is a subjective or philosophical question. Nevertheless, these are reasonable assumptions about individual preferences, allowing us to proceed further.

Cardinal voting to the rescue?

In this post, I have completely ignored another class of voting systems called cardinal voting systems that may allow us to escape the Arrow’s impossibility theorem. Instead of asking for a preference order, we can ask the voters to assign a rating to each candidate. Notice that we make even stronger assumptions about individual preferences than those discussed above. If cardinal voting is allowed, It will convey more information about voters’ preferences. It would also allow us to answer questions like “How much do I prefer a over b? And what about in comparison to my preference of b over c?”. It would also allow us to compare utilities across individuals. But, in doing so, we do something called interpersonal comparisons of utility. It raises the question of whether there is a meaningful way to compare utility across different individuals?

This is frustrating, isn’t it? We have reached the end of the post and yet are left with more questions than answers. In the absence of a “perfect voting system” which voting system should we go for? What criterion should we relax? Does Arrow’s impossibility theorem mean that we are collectively doomed to choose bad outcomes? Or a more practical question of why we go with plurality voting despite its apparent flaws? This is just the tip of the iceberg. The issue of collecting individual preferences to reach a collective decision is, in fact, a fascinating area of study itself, called Social Choice Theory. Owing to the length of this post, I have avoided formal mathematical definitions and frameworks used to analyze this issue. Few of the results & paradoxes that arise in this subject will simply blow one’s mind. But perhaps, I have fulfilled my motive to make you realize the importance of the voting systems and how we can go far beyond simple majority or plurality voting. So next time you vote, question yourself, “Given the context of the vote, does this particular voting system work properly? Or can we do better?”.